I was saddened to hear that Anna Volkova Barnes, the last remaining dancer living in Australia from the Ballets Russes companies who visited between 1936 and 1940, has died aged 96. She danced her way out of this life on 18 August. An obituary is in process [now available], but in the meantime below are two non-dancing images that I especially like from Volkova’s dancing years in Australia and later in South America. 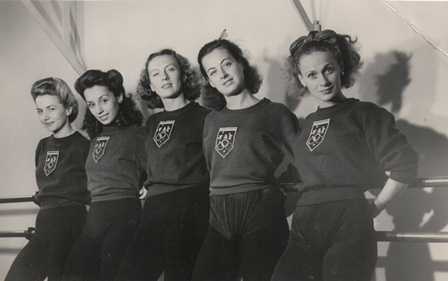 The photo immediately above was taken in Rio de Janeiro not long before Volkova agreed to move to Australia to marry Australian rower Jim Barnes. She came to Australia in 1945 and they married in 1946. The photo above was a promotional shot for a performance these dancers gave for a student organisation in Rio.

In addition here is a link to some footage (probably also classed as non-dancing to a certain extent) taken by Dr Ewan Murray-Will at Bungan Beach. It is a mini-performance, known amongst the dancers as the Bungan Ballet, featuring Volkova, Ludmilla Lvova, Anton Vlassoff and Paul Petroff. Volkova is the dark-haired lady clambering over the rocks in the early seconds of the footage in a story about a damsel in distress who is rescued from the sea.

I last saw Anna Volkova earlier this year when I went to visit her at her home in Belrose where she helped me identify some of the images in the Upshaw album, about which I have written elsewhere. She was as charming and generous as ever. A truly wonderful lady. Vale.