Tempo Dance Festival has always had a program slot, Y Chromozone, for an exclusively male line-up of choreographers and dancers to do their thing.

I remember it in previous years being overlong, over compered, and in need of more insightful programme notes—but as one who thinks gender has little to do with choreographic vision anyway, I was always going to be hard to convince of the concept. (I know, I know, I’m in a minority here, but I am a member of many minority groups and that is no bother to me, per se). OK, let’s to the dance…

The first listed item did not happen, but there was no announcement to warn us of that. That’s a serious issue for a reviewer working in the dark through a program of 13 separate items without interval. I don’t usually take notes during a performance but prefer to remember what is memorable, consulting the program before and after. For that to work, you don’t want the second item playing as the first.

That said, the opener was stunning—Not, choreographed and performed by Oliver Carruthers, to music Tourists by Nicolas Jaar. He was carried onstage in a twisted knot which then unfolded, limb by twist, to open finally into the straight line of his body. A secure mover this one, from Unitec.

Asmodeus, choreographed and performed by Jay Clement (to Arsonist’s Lullaby by Hosier), a gymnast harnessing extraordinary strength and balance. He spent most of the dance upside down, on the palm of one hand, legs airborne, slowly rotating on top of three poles, in a delicious slow-motion dance that held tight to its music, thus allowing poetry to emerge from its power.

Enough, choreographed by val smith, was performed by two great wild things swathed in 1000 shaggy sheepskins. They edged on walking sticks hesitantly and painfully from downstage left to upstage right. About mid-stage they rolled over each other, and one great monster pulled apart to become two—so I guess you could say they sprogged. They then continued the pilgrimage across the stage. These were creatures that Maurice Sendak might have designed. Music is identified as ‘anonymous vaporwave track pirated from a gay porn site’. Well, they said it. The whole strange hilarious thing was possibly a metaphor, depending on what you want from your metaphors.

Me, Myself But Why? choreographed by Stephen Hidalgo, performed by Stephen Hidalgo and Stephen Hidalgo. This screen-to-stage conversation between ‘himselves’ as screen figure and on-stage dancer was played with brilliant timing and a sharp dry wit that had us in stitches. Lucky this isn’t a competition as we’ve had four winners already and we’re not even a third of the way through the program.

This is a thing, choreographed and performed by Connor Masseurs, to Freefallin Dreams by Saje, was a contemplative solo at times reminiscent of a breakdancing insect, at other times a beguiling man. No program note to profile the dancer, just an obtuse paragraph that did no justice to the interesting textures of the very well-shaped dance we saw.

Dane Head, a 14 year old pupil of Allan Barry at Mt. Eden Ballet Academy, performed the peasant pas male variation from Giselle. His impressively clean technique and sound musicality, coupled with his obvious delight in dancing, made for a pleasant experience for him and us, both.

Outcast by Fenjay Sapon was a quartet of Unitec dancers often pitching one against three. Confident in their strength and their ability to build atmosphere, their use of rhythms and canon added interesting depth to this piece.

Liberate-He, by Earl de Castro was a thrust of waacking and voguing, tight jeans and high heels, all pitch perfect.

Joe Carvalho performed a mesmerising solo on an acrobatic circus apparatus, the cyr wheel. Harnessed through music, A Little Walk to Nowhere by Brain Damage, this performance brought Leonardo da Vinci’s Vitruvian man, after waiting 530 years in a manuscript, to spend time with us. This was a miracle of true proportion and conversation with gravity. Carvalho’s heroic performance was delivered with a modesty that will not easily be forgotten

Lark, choreographed by Loughlan Prior, of Royal New Zealand Ballet, performed by Jon Trimmer and William Fitzgerald, proved a masterwork. There’s little surprise in that since Prior has already earned considerable choreographic kudos. 78 year-old Trimmer’s presence on stage, before he even moves a muscles, reeks with the authenticity of a performer who deeply knows how dance works. Fitzgerald moves with a calm clarity that makes virtuosity seem effortless, and his elevation is something to savour. Suffice to say this piece portraying an older dancer as he sifts memories of dances past, alongside a younger dancer’s questing after the kinds of things that will bring meaning to his future performances, had a poignancy to treasure.

Blue Bird, by Christopher Olwage, has recently been performed as part of Viennese Pride celebrations in Austria and we can be sure it received the same audience appreciation there as here. To Young and Beautiful by Lana Del Ray, the dancer en pointe and with costume of blue feathers that were shed in stages, suggested a cabaret twilight of happiness tinged with yearning.

The final slot, Idco Next Generation—Swagganauts, is a team of nine young Hip Hop dancers who have all the cut and thrust of seasoned street dance. Precision, speed, agility, cool, and a cap with the peak going down the back are all stitched in place so’s you couldn’t slip a knife between the moves. Josh Cesan should take credit for this spirited finale. 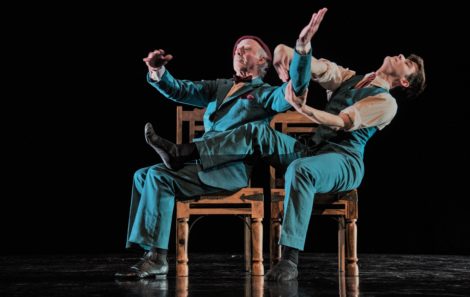 One thought on “whY Chromozone. Tempo Dance Festival”