I am delighted to have renewed just recently my connections with two of the dancers who performed in Australia with the Ballets Russes companies of Colonel de Basil—Tatiana Leskova and Anna Volkova. Both feature in the photograph album that was the subject of a recent post, James Upshaw and Lydia Kuprina in South America, sometimes together, sometimes alone or with others. They were and still are great friends.

Both remembered Upshaw and Kuprina quite clearly and Leskova was able to tell me that Upshaw died in France, although exactly when is still unclear.

Leskova celebrated her 90th birthday in December—’I turned 17 on the boat coming to Australia’, she recalls—and is still very active in the dance world. Her biography, written by Suzana Braga and published in Brazilian Portuguese (Tatiana Leskova: uma bailarina solta no mundo) in Rio de Janeiro in 2005, has recently been translated into English. In addition, the irrepressible Leskova has just published a book of photographs. I hope to write about these publications at a later date. 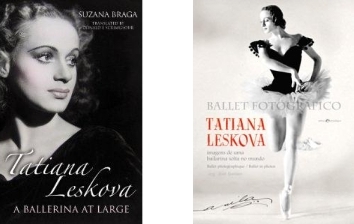