A lot has been written over the years about Graeme Murphy’s Nutcracker—how it is an Australianised version of a well-loved classic, how it looks back to momentous events in Australian dance history, and so on. I am one of those lucky people who has seen every one of the seasons of Murphy’s Nutcracker since its premiere in 1992 and now I prefer to write personal thoughts rather than explanatory notes.

Murphy’s Nutcracker never loses its magic, its beauty, its theatricality, and in fact each season shows something more, something I haven’t noticed before, something surprising and unexpected. But most of all, it continues to tell me that this is a triumph for Murphy and his collaborators.

What came across really strongly for me this time was the theatricality with which the links across generations were made. I have always loved that moment, very close to the beginning, when Clara the Child picks up the package Clara the Elder has dropped as she makes her way to her home. They look at each other intently and in a brief instant we realise that they have recognised each other in some way. The child is looking at herself as an older woman, the older woman sees herself as a child. The moment was beautifully handled by Chrissa Keramidas as Clara the Elder and Hannah Sergi as Clara the Child.

Keramidas was, in fact, a surprise as Clara the Elder. She is still very much the dancer, with her long, slim limbs, beautifully poised head, and pure line through her whole body. She danced with scarcely a hint, in a movement sense that is, that her character was that of an ageing former ballerina. What was surprising was that her exceptional grace of movement distinguished her from her elderly friends in a way that I haven’t seen before. She was truly the ballerina rather than the soloist or corps de ballet dancer, and her collapse as she watched and remembered her career with her friends was all the more poignant. 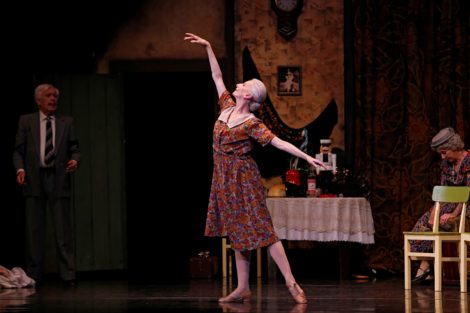 Chrissa Keramidas as Clara the Elder in Graeme Murphy’s Nutcracker. The story of Clara. The Australian Ballet 2017. Photo: ©Jeff Busby

I have always been fascinated, too, by the very moving moment in Act II when Clara the Ballerina (danced on this occasion by Dimity Azoury) watches as her lover is killed during a revolutionary battle in Russia. As she takes in the enormity of the situation, a series of scrims lift and we see Clara the Elder in her white nightgown clutching a photograph of her lover, the lover we have just seen shot. The two Claras are one and dance together sharing their pain and loss. With Keramidas and Sergi having established such a strong bond in that fleeting early moment, the emotive power of the cross generational links, which are at the heart of this ballet, came once more to the fore (this time between Keramidas and Azoury). The impact of this scene was heightened, too, by John Drummond Montgomery’s lighting for this moment—hazy down lights against a dark background of emptiness—and perhaps also because I was sitting further back than usual and could focus on an overall picture.

This time I also noticed more clearly the choreographic beauty of the snowflake scene. As snowflakes fall gently to the ground, disintegrating on the way down, so too did Murphy have his snowflakes drop to the floor moving first through a clearly articulated bend to the supporting leg so the landing from there was like a crumbling of the movement rather than a deliberate fall. Against this were sharp, icy stabs of movement as the dancers lifted a leg into the air and, at one point, a myriad of hands and arms moving up and down recalling a flurry of snow. At least that’s how I saw it: an enchanting display of snowy qualities! Artists of the Australian Ballet in Graeme Murphy’s Nutcracker. The story of Clara, 2017. Photo: © Jeff Busby

I also admired (more so than usual) Philippe Charluet’s film collage, especially those sections relating to the Russian Revolution. It has always been a treat to see how the film collage plays across the stage to add such a masterful context to this ballet, but this time the collage seemed even more pertinent to me, reading as I am at the moment a book that delves into the early life in Russia of George Balanchine.* And indeed Murphy’s inclusion of the two peasants in the picnic excursion that Clara and her friends enjoy before the Revolution begins in earnest had the same effect. The juxtaposition of wealth and privilege and lack of means to live comfortably was made clear with this small touch.

Azoury and Jarryd Madden danced strongly in the leading roles of Clara the Ballerina and the Beloved Officer, as did Andrew Wright as the Nutcracker Prince. Azoury has all the technique ready and waiting but just needs a little more feeling of freedom to make those curving, swirling lifts of the various pas de deux look as spectacular as they are. A little more time? Oh, and thank you to the new (to me) ‘older dancers’, friends of Clara the Elder. Graeme Hudson brought a certain gravitas and was it Terese Power who kept eating those chocolates and creating such a distinctive character?

Featured image: Artists of the Australian Ballet in the Imperial Ball scene from Graeme Murphy’s Nutcracker. The story of Clara, 2017. Photo: © Jeff Busby * Elizabeth Kendall, Balanchine and the lost Muse. Revolution and the making of a choreographer (New York: Oxford University Press, 2013)